Heavy Marble Puzzle- What is the minimum number of weighings needed to be certain of identifying the heavy marble?

The first step in solving this problem is to realize that you can put more than one marble in each pan of the balance. If you have equal numbers of marbles in each pan, then the heavy marble must be in the group on the heavy side of the balance. This saves you from having to weigh each marble individually, and it enables you to eliminate many marbles in a single weighing. 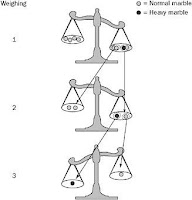 This may seem to be the correct answer. The solution wasn’t completely obvious, and it’s an improvement over weighing the marbles one by one. If you’re telling yourself that this seemed too easy, you’re right. The method described so far is a good start, but it’s not the best you can do.

How can you find the heavy marble in fewer than three weighings? Obviously, you’ll have to eliminate more than half the marbles at each weighing, but how can you do that?

Try looking at this problem from an information flow perspective. Information about the marbles comes from the balance, and you use this information to identify the heavy marble. The more information you derive from each weighing, the more efficient your search for the marble will be. Think about how you get information from the balance: You place marbles on it and then look at the result. What are all the possible results? The left pan side could be heavier, the right side could be heavier, or both sides could weigh exactly the same. So there are three possible results, but so far you’ve been using only two of them. In effect, you’re only using 2/3 of the information that each weighing provides. Perhaps if you alter your method so that you use all of the information from each weighing you will be able to find the heavy marble in fewer weighings.

There’s still a minor wrinkle to work out before you can apply this process to the problem at hand. Eight isn’t evenly divisible by three, so you can’t divide the eight marbles into three equal groups. Why do you need the same number of marbles in each group? You need the same number of marbles so that when you put the groups on the balance the result doesn’t have anything to do with differing numbers of marbles on each side. Really, you need only two of the groups to be the same size. You’ll still want all three groups to be approximately the same size so you can eliminate approximately ⅔ of the marbles after each weighing no matter which pile has the heavy marble. 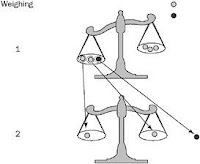 This is the part where the interviewer determines whether you hit on the preceding solution by luck or because you really understand it. Think about what happens after each weighing. You eliminate 2/3 of the marbles and keep 1/3. After each weighing you have 1/3 as many marbles as you did before. When you get down to one marble, you’ve found the heavy marble.

Because multiplication and division are inverse operations, the number of times you have to divide the number of marbles by 3 before you end up with 1 is the same as the number of times you have to multiply by 3 (starting at 1) before you get to the number of marbles. Repeated multiplication is expressed using exponents. If you want to express multiplying by 3 twice, you can write 32, which is equal to 9. When you multiply twice by 3 you get 9 - it takes two weighings to find the heavy marble among 9 marbles. In more general terms, it takes i weighings to find the heavy marble from among n marbles, where 3i = n. You know the value of n and want to calculate i, so you need to solve this for i. You can solve for i using logarithms, the inverse operation of exponentiation. If you take log3 of both sides of the preceding equation you get i = log3 n.

This works fine as long as n is a power of 3. However, if n isn’t a power of 3, then this equation calculates a noninteger value for i, which doesn’t make much sense, given that it’s extremely difficult to perform a fractional weighing. For example, if n = 8, as in the previous part of the problem, log3 8 is some number between 1 and 2 (1.893 … to be a little more precise). From your previous experience, you know it actually takes two weighings when you have eight marbles. This seems to indicate that if you calculate a fractional number of weighings you should round it up to the nearest integer.

Does this make sense? Try applying it to n = 10 and see whether you can justify always rounding up. log3 9 is 2, so log3 10 will be a little more than two, or three if you round up to the nearest integer. Is that the correct number of weighings for 10 marbles? For 10 marbles, you would start out with two groups of 3 and one group of 4. If the heavy marble were in either of the groups of 3, you could find it with just one more weighing, but if it turned out to be in the group of 4 you might need as many as two more weighings for a total of 3, just as you calculated. In this case the fractional weighing seems to represent a weighing that you might need to make under some circumstances (if the heavy marble happens to be in the larger group) but not others. Because you’re trying to calculate the number of weighings needed to guarantee you’ll find the heavy marble, you have to count that fractional weighing as a full weighing even though you won’t always perform it, so it makes sense to always round up to the nearest integer. In programming, the function that rounds up to the nearest integer is often called ceiling, so you might express the minimum number of weighings needed to guarantee you’ll find the heavy marble among n marbles as ceiling(log3(n)).

This is another example of a problem designed such that the wrong solution occurs first to most intelligent, logically thinking people. Most people find it quite difficult to come up with the idea of using three groups, but relatively easy to solve the problem after that leap. It’s not an accident that this problem begins by asking you to solve the case of eight marbles. As a power of 2, it works very cleanly for the incorrect solution, but because it’s not a power (or multiple, for that matter) of 3 it’s a little messy for the correct solution. People generally get the correct answer more quickly when asked to solve the problem for nine marbles. Look out for details like this that may steer your thinking in a particular (and often incorrect) direction.

This problem is a relatively easy example of a whole class of tricky problems involving weighing items with a two-pan balance. For more practice with these, you might want to try working out the solution to the preceding problem for a group of marbles in which one marble has a different weight, but you don’t know whether it’s heavier or lighter.